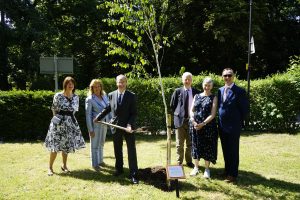 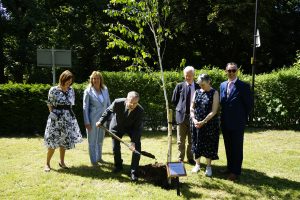 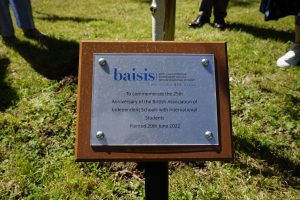 The British Association of Independent Schools with International Students (BAISIS) has celebrated its 25th birthday with a special event at the beginning of this year’s BSA National Boarding Week (20-26 June).

On Monday, June 20, BAISIS held a tree-planting ceremony at Mill Hill International School in North London to celebrate 25 years since its launch. The ceremony took place on the first day of this year’s BSA National Boarding Week, which sees boarding schools all over the world taking part in a series of activities to highlight everything that’s great about boarding.

Originally formed in 1997 as The Association of International Study Centres (AISC), BAISIS was set up by Sherborne School, Taunton School, Rossall School and Bedford School. At the time, these were the only four schools in the UK with international study centres. These were stand-alone units, separate to their parent schools, which were led by Principals who had pioneered teaching English as an additional language, as well as a range of academic subjects for students with limited English. The centres were designed to help students to prepare academically, pastorally and culturally for successfully integrating into a British boarding school, which many schools were not set up to provide at that time. The Principals of each centre would meet regularly to network and share ideas of best practice.

BAISIS joined BSA Group in the summer of 2020 and has continued to go from strength to strength and now has 121 member schools and 20 supporting members. It supplies both teaching and pastoral staff with strategies to enable them to support their international pupils inside and outside the classroom. BAISIS membership also acts as a mark of quality to international parents and agents through its commitment to academic and pastoral provision for non-native English speakers.

Sarah Bellotti, Head of The Mount, Mill Hill International and BAISIS Chair 2022, said: “We’re delighted to be celebrating our 25th anniversary. We’re especially pleased that we were able to do so in the company of most of our former Chairs, who’ve made such a tremendous contribution to everything BAISIS has achieved in the past quarter of a century.

“It’s an honour to continue building on their work and the long and proud tradition BAISIS has of helping international students to flourish in their studies and achieve their full potential.”

Caroline Nixon, Director, BAISIS and International and Membership Director, BSA Group, said: “When BAISIS launched as AISC 25 years ago, there was very little training available or shared knowledge for teachers or houseparents to draw on when supporting international students. We’ve helped to transform that in the past two and a half decades, and that’s something we can be very proud of.

“The theme of this year’s National Boarding Week is ‘one boarding community’, and that continues to be at the root of everything BAISIS does to help give international students studying in British independent schools the best possible chance of academic success and cultural integration.”

Robin Fletcher, CEO, BSA and BSA Group, said: “The work that BAISIS has done in the past 25 years and continues to do to support so many students from all over the world, as well as teaching staff, cannot be underestimated.

“It’s fitting also that we’ve marked the occasion by planting a tree. In 2014, BSA launched its Boarding Orchard, which encourages schools to plant fruit trees in their grounds. The trees symbolise the ‘tree of knowledge’ and demonstrate each school’s commitment to growth and caring for the environment.

“Planting trees also forms an important part of this year’s Platinum Jubilee celebrations through the Queen’s Green Canopy initiative, so it really is the perfect way to mark this occasion.”