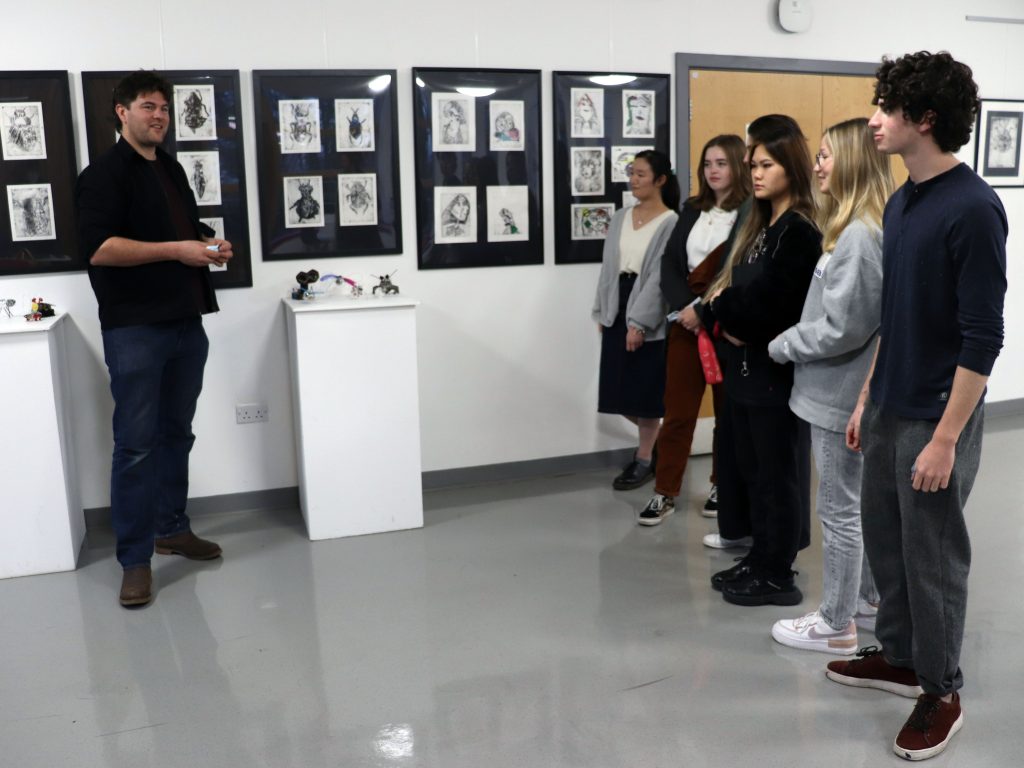 As Creative Director of Glastonbury’s Arcadia stage, Pip spoke passionately about the evolution of his famous ‘Spider’ set design. His talk touched on the joys of watching his ideas come to life on a grand scale, as well as painting a realistic image of the financial and logistical challenges involved.

As a proud Old Sidcotian (1999-2001), Pip recounted how his time at Sidcot had a powerful impact on his career, from the environmental focus that inspired his use of recycled materials in his set design, to the encouragement of his teachers who enabled him to get a boot-load of scrap metal from Weston-super-Mare to make his early creations. He added that his drawing and presentation training at Sidcot had really added value to his festival engineering projects, and the evolution and power of CAD drawings in bringing his team’s ideas into reality.

Pip’s company – Arcadia Spectacular – is famous for creating an immersive experience, founded on the principles of re-use and recyclability. He spoke about the challenges of staying true to this when developing an immersive experience. For example, Pip created a show in Bristol, with his team recycling vegetable oil from all of the Bristolian fish and chip shops to fuel the smoke systems. Staying true to these ethical principles had a hugely positive effect on the business, as the media picked up on the story, resulting in widespread international coverage and acclaim.

Discussions with students focused on the challenges of surviving through Covid, and the impact of digital and social media on set design and festivals. Post-presentation, Pip was shown around the students’ recent art exhibition and offered the opportunity to hold future workshops to develop ideas.

Commenting on Pip’s visit, Johannah Egan, Head of Art at Sidcot School said, “It was wonderful to hear how Pip’s experience of the Sidcot values and ethos played a significant part in the success of his creative journey.”

Year 13 Art student, Martin Sanchez added, “Pip took a year off before starting his life’s big project. He didn’t fit conventional boxes, so his career path wasn’t clear cut. He was warned against artistry, but trusted his love for his craft more than the critics. And that to me is where his success came from. It was the genuine nature of his art that made it magnetic. Pip founded more than an industry, he started a community and through it, a home for people like him. It meant a lot to me to hear his talk, it made a future like his seem possible. Even more so since we’re starting off at the same place – Sidcot School.”